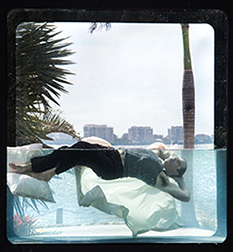 By 2050, large coastal areas of Miami will be submerged.  Scientists and environmentalists have been warning people for years. In fact, they are now using a term, anthropocene, to refer to the epoch when human activities have begun to have a major impact on the ecosystem.  Anthropo=human, cene=new. Holocene refers to the era starting from the last ice age about 11,700 years ago and continuing into the present. Holo=entirely cene=new.  There’s no consensus on when the Anthropocene begins, but the term, popularized in 2000 by Nobel Laureate and atmospheric chemist Paul Crutzen, stresses the impact of human behavior on the planet. But, sometimes terms and warnings are often not even enough to get the public’s attention.  Sometimes, it takes art.

From Wednesday, Dec. 2 to Saturday Dec. 5 during Art Basel, Miami Dade College’s (MDC) Live Arts will present Holoscenes, a provocative performance art exhibition, at the Wolfson Campus.  The earth-conscious exhibition will activate an elevator-size human aquarium filled and drained by a custom hydraulic system.  Visitors will be able to view the aquarium from 360 degrees.

Inside the water chamber, performers will act out various routine behaviors of daily life (i.e. brushing their teeth, reading a paper, getting dressed). As the water rises and falls, the actors will attempt to continue their activities, seemingly unconscious of the pressure submerging them.  Hydrophones will allow them to communicate sounds to the audience, creating an otherworldly sonic atmosphere, echoing the murmurs of environmental destruction through the predicted deluge.

The mastermind behind Holoscenes is artist, director writer, visionary, founder of Early Morning Opera (EMO), and Ted Senior Fellow, Lars Jan. He said he wanted to “make people feel climate change in their gut, rather than just understand it.”  Additionally, Lars said, “By performing these behaviors we’re highlighting the patterns of the everyday, and simultaneously the lack of attention that most of us place on the longer term, epic timescale that the planet operates on. This is about our consciousness.”

Without knowledge and awareness one can’t be prepared to take the necessary precautions to secure one’s safety, relocating or buying scuba gear, laughs.

Put this exhibition on your  list as part of your Art Basel repertoire and have your consciousness raised.  There will also be organized, public conversations with the Earth Ethics Institute at MDC, The Idea Center at MDC, and Emerge Miami

This performance launches the Live Arts In Focus series, which offers powerful programs tackling today’s pressing topics. Next in line is Camille A. Brown’s Black Girl: Linguistic Play, which explores black female identity through dance and rhythmic play, on February 20.