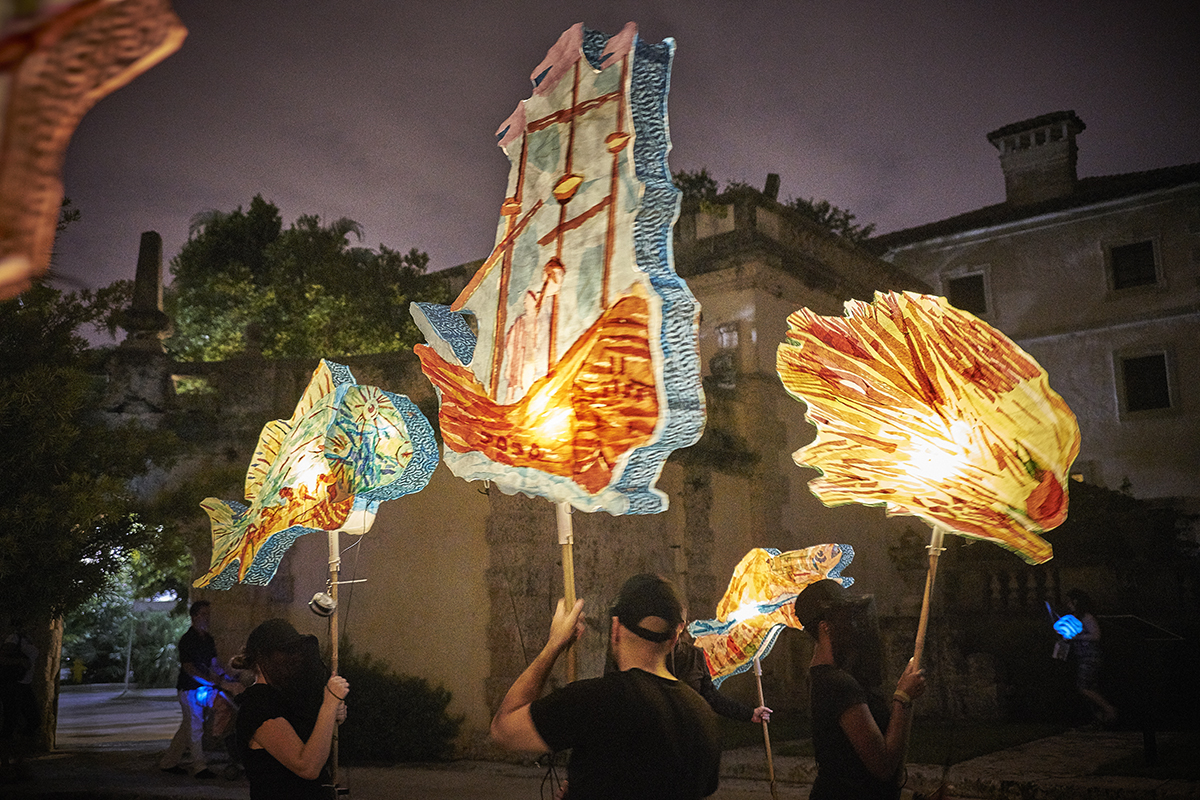 Article was written for miamiartzine.com

New York-based artists Sophia Michahelles and Alex Kahn co-created the Processional Arts Workshop (PAW), a non-profit organization dedicated to producing processions, parade and carnivalesque performances, which are human-powered for community building, in a public, site-specific space. It is quite a coincidental story about how they got to Miami.

Former Vizcaya curator Gina Wouters was researching the art of R.W. Chanler, one of the painters whose work was commissioned by James Deering to decorate his estate, for a book. Her search took her to a residence where Sophia and Alex were living. It happened to house the largest collection of Chanler’s work in the country. There they met Gina. Gina mentioned to them that Vizcaya would be a great fit for a moving exhibition of their giant lanterns, and 3-D puppets. So a collaboration was born. FLOAT: A Caravel’s Journey is the third workshop and show at Vizcaya from the Processional Arts Workshop.

At Vizcaya Village this week, children, their parents, and others worked together to make them. “Art is often infantilized and thought of just a hobby, not an actual career. We try to demystify this as it is an honor for children to work with their elders to create these projects in communities,” mentioned Kahn

On Saturday, Aug. 4, those who created the lanterns and puppets along with other volunteers will dress up for the final parade. It will start at the Vizcaya Village, across the street from the Main House, where the Planetarium used to be. And it will end behind the Main House in front of the Barge by the Bay.

Michahelles and Kahn explained at the workshop on Monday evening that they had chosen the various designs for the puppets and lanterns based on the mythology of the estate. “When you talk about ancient myths, the unknown seas, it’s never so remote to what you can relate it to in a contemporary context,” mentioned the artist.

There are mermaids to reference the imagery on the Barge. There are also many Caravels, as the title implies. These are the “pirate” ships that Spanish Conquistadors used to travel the high seas looking for spots like Miami, which at the time were basically unconquered. In this way, James Deering, the original owner of Vizcaya and wealthy industrialist, was a pioneer. He built the beautiful villa in a dangerous area, near the water where the threats of hurricanes and predators like alligators loomed over them.

Since he was secluded, being one of the first homes in the lush tropical area, his idea was that estate would be self-sufficient. So he had a garden in the area that is now Vizcaya Village. He even had stables to keep animals, and the servants lived in this area too. Much of the Village is still intact and the garden has been replenished with herbs and vegetables that they use for dinners and events.

As the future of Vizcaya resides in opening up this unexplored area to guests, the current artists are bridging the gap between them.

The future of Vizcaya is unclear with the threat of climate change looming over the Bay. The last Hurricane damaged some of the landmark’s gazebos along the water. Artists who showcase their work at Vizcaya often feel it is necessary. Kahn said: “As an artist working in Miami if you are doing site-specific it is hard to do it without thinking of climate change.

If you think of the past, environment, future of a place. Climate change is welded into that conversation, especially Vizcaya being on the water.” He will portray images of hurricanes and other references to the sea on some of the lanterns.