The Tao of Open Mics

My turn to play was now fast approaching. I took my guitar out of the case to tune it prior to the 3-song set, and stood by the 3-step stairs in the space adjacent to the audience chairs strumming the chords of “El Desastre” the 1st song planned for my set. The performing act was the prevalent sound in the air, it was loud, but that didn’t impede the tall thin dude that was standing in front of me to hear my chord progression, I sensed him reacting positively to it when he turned around saying: hey you gonna play now

Yes, and You?. Yeah, later, I am probably last,…cool I’ll try to stay….you know how to tell the tone you are playing? He asked, Yes sure, I answered…cool, because if you tell me the tone of a song your playing I can just jump on it you know? Wuau man that would be amazing. Hey, what’s your name?

Dante, he answered. This was the 3rd Monday in a row attending the @xcarlacabellox Churchill’s Theater de Underground open mic as a result of an unavoidable decision in my life: To put my songs out there, songs I have written throughout the course of 25 years, songs that have been hidden from the world for such a long time. A sense of now or never. The result of answering the question, if you know you’ll die in 6 months, what would you do?

The 1st time was the hardest. The sense of accomplishment was immense, I got out of that stage with a feeling of “If I did this I can do anything”, and I am starting to get addicted to the butterfly solar plexus fluttering I get the nights I play, probably that’s where the heart of the matter is, to learn to let go and relax and breath in a moment where all fears, ideas, judgments, conspire to try and knock you out. It’s a Yogi discipline, breath into a body part, feel your feet touching the ground as the lyrics come out from your chest through your mouth out to the world, hopefully in tune. LOL, “The Tao of Open Mics”.

But if this is about TAO, about uniting separated parts. What do you do after keeping it together for yourself? It’s one of the first aspects of this that I am trying to act upon, to see how can I contribute to a greater whole.

One immediate answer for me is, WRITING. I love writing and there is no shortage of stories around. So as I start, thanks to previous experiences in similar collectives, I make a stark warning to myself: Don’t label anything as a “Scene”, don’t say “the Miami music scene is brewing” 😕, “something big is going to happen”🤮, “Miami is the next Seattle”😵 or something like that. It’s a mistake I have done in the past. Instead, Keep it close, keep it warm, keep it essential to the struggle of each one of us.

The Tao vibe was definitely there at @inhalemiami in the wonderful ‘Open Mic and Barbecue’ that Monica Vega, the @miamichronicles publisher, curated. After an internal struggle of the type: “should I stay, or should I go” I decided not to stay at home and to “Go” to the Open Mic, I am really glad I did. I parked the car, and as I was coming in to the Studio and said hi to Monica, she asked if I wanted to play next.

Excitedly, I went back to the car for the guitar, tuned it, and within 5 minutes I was playing a 3-song set, an opportunity I would have never seized if the idea of staying home would have won me over. 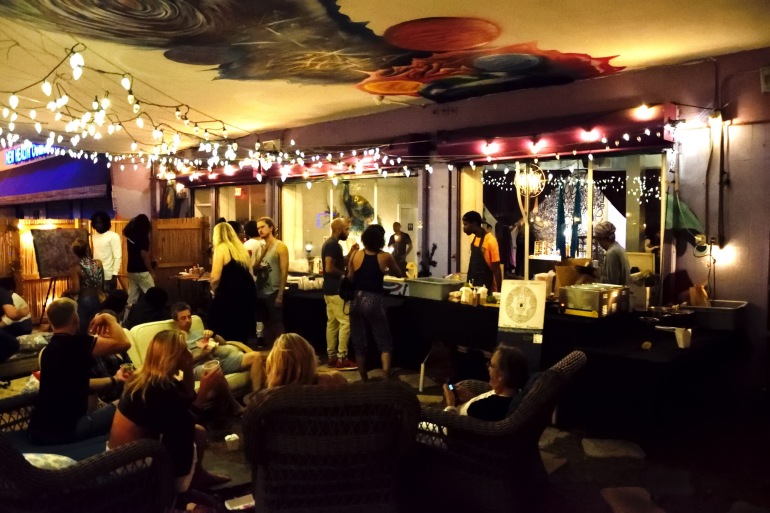 I had found out about the event through Dante’s instagram (@psychicdove) which I had followed that previous night at @churchills_pub, so aside from playing my songs, watching Dante play was also big motivation. He has a tight Band and they Rocked! He is not the Miami Jimmy Hendrix , or Bob Marley, or Lenny Kravitz, or Phyl Lynnot, he might be a blend of all them which means he is a true original. It got to me when before one of the songs he talked about the need to keep on going despite the anxiety he sometimes feels, a struggle probably reflected in “Magic City”, the highlight of the @psychicdove set, a song that probably will be a single in his up and coming album. It’s an instant classic.

an ocean of violets and there in bloom,

we’ll dance in the sunshine,

sing in the rain

no use in trying to hide that Miami pain

Born and raised in the county of Dade

the Magic city’s where I am from

all my friends are friends with the flowers

we’ll dance in the sunshine

sing in the rain

no use in trying to hide that Miami pain

Born and raised in the county of Dade

the Magic city’s where I am from

The power of the tropical Caribbean mystical

the power of the tropical la la

Exactly Dante! No need to hide that Miami pain. I am sold.

Next for me is to try and find a word to replace “Scene” in these writings. Any ideas?

Photo Gallery of Inhale Miami’s BBQ. Miami Chronicles curated the art, music, and garden entertainment. Check out the amazing and creative vendors and artists who made this night special.