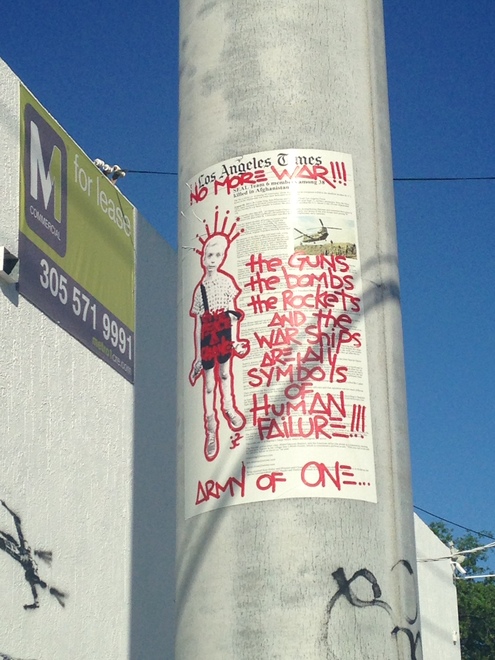 BEHIND THE MURAL: NOBODY PAYS TRIBUTE TO THE PASSING OF ANTI-WAR STREET ARTIST ARMY OF ONE

In Wynwood, there are many murals. Onlookers pass the artworks on the streets and admire the creations in good fun, but observers may not realize that there’s a deep, human story behind many of the works. A new mural, next to bustling Panther Coffee, where Miami’s artistic community convenes, is tribute to a recent death. A child with a tear drop in his eye holds a toy grenade, red paint dripping onto his hands. The boy’s shorts are marked with John Lennon’s lyrics, “Give Peace a Chance.” The mural is inscribed in bright blood-red letters with the phrase “R.I.P Army of One, (1961-2014).”

Miami artist TMNK (The Me Nobody Knows) aka NOBODY of “Love Stories Suck” fame, created the mural in Wynwood as a tribute to the life of fellow street artist Jef Campion, also known as Army of One. The Brooklyn street artist lost his life to suicide in January.

TMNK, tribute to Army of One; courtesy of Wynwood Map

The late Jef Campion was known for putting up anti-war artwork with the same image of the toy grenade-toting boy, from Diane Arbus’ famous photograph Child With a Toy Hand Grenade in Central Park. Just down the street from Panther Coffee, in front of Gramps Bar, up high on a graffiti-crowded street-side electricity pole, there remains an Army of One piece; a sheet of paper printed as a Los Angeles Times front-page news feature, shows a similar apparition. In this piece, the boy’s wide eyes and twisted grimace reflect the derangement of man-made war on the childlike purity of the human spirit. The words “the guns, the bombs, the rockets, and the war ships, are all symbols of human failure” sprawl out in simple letters over the outlined image of warped innocence.

Diane Arbus, Child With a Toy Hand Grenade in Central Park, 1962; Courtesy of the artist

Campion put up artwork with Arbus’ famous image over the streets of cities such as New York and Miami. Like the photographer Diane Arbus, Jef Campion sadly also took his life. Eerily, Campion lived a few doors down from Arbus’ former residence in New York.

Along with being a street artist and lone street-soldier of peace, Campion was also a New York City firefighter. He was a first responder during 911 and helped in the recovery efforts at Ground Zero, an experience that influenced his anti-violence street art.

Next time you pass through Wynwood and admire the art on the streets, remember there is most likely a story behind the mural.

This article was written for ArtSlant.com