On September 2, 2017 about 300 people marched through downtown Miami with signs to protest the systematic exploitation and abuse of animals in the meat, dairy, fashion, entertainment and other industries. 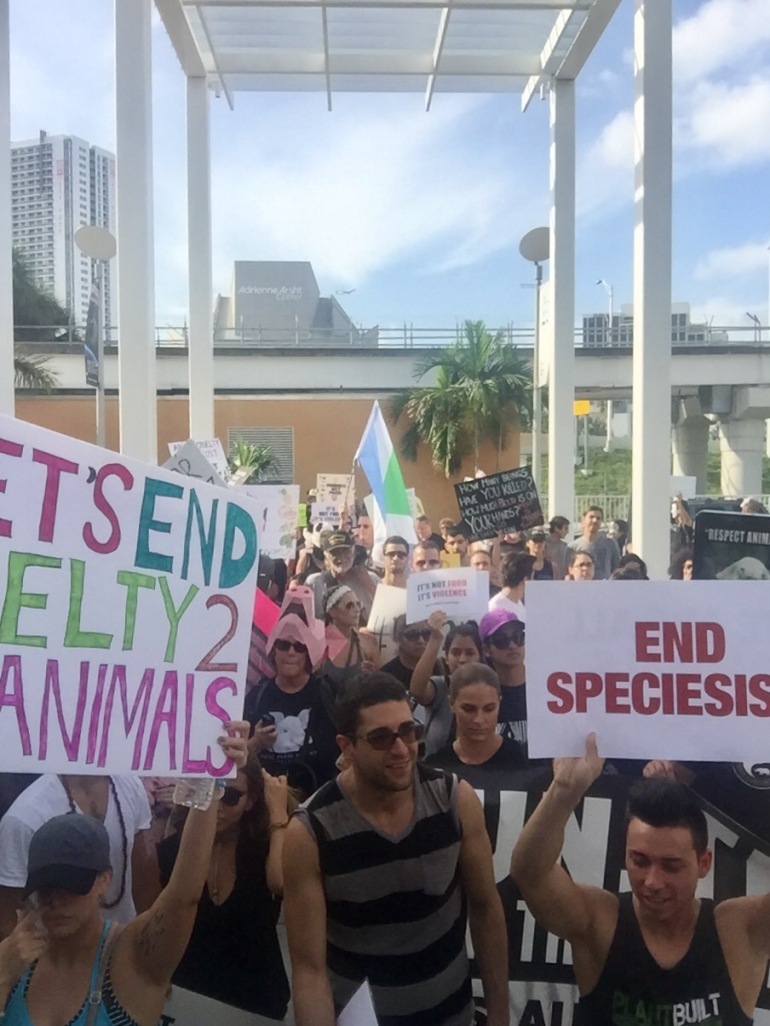 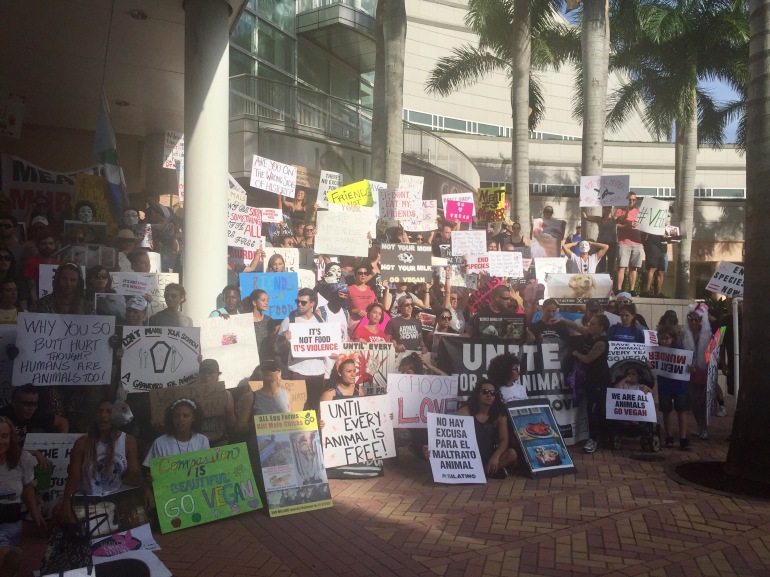 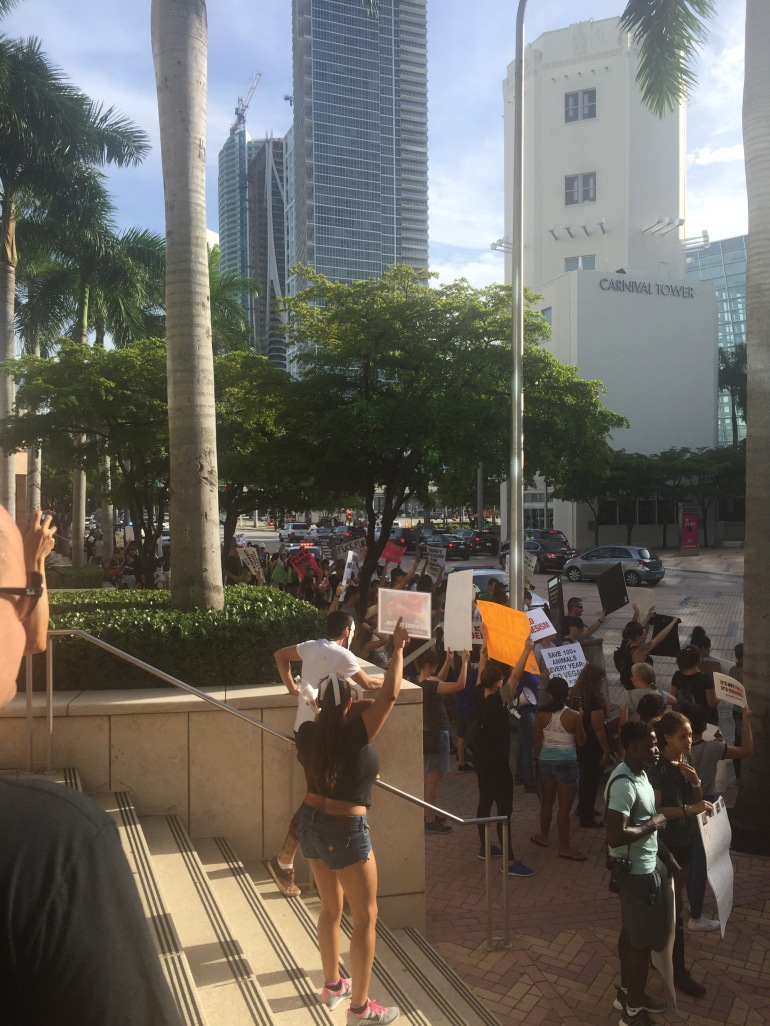 Some with signs, others in costume, they marched through downtown Miami from the Omni Station to Bayside and back.

After meeting at the Omni Station, the group walked towards Bayside and stopped in front of Pucci’s Pizza.

Another stop was at the Patricia and Phillip Frost Museum

Activist Liz Jones spoke out to museum visitors who came out to see what was happening.

It was the first ever march of its kind in Miami, NY and LA. Houston had to cancel their march due to the weather. In London, the march consisted of 5000 people. It was the second year that the activist group Surge held it in the capital city at Trigalfar Square, and the number of attendees doubled.  In NYC, 3000 protestors walked down Broadway meeting at the Flatiron Building.  And in LA, there was about 900 participants.

The march was mostly ignored by the mainstream media. In Miami, I was curious to see what I would find on the front page of the Miami Herald and the Miami New Times on the Monday morning after the march. The Miami Herald had mostly hurricane coverage. But, what I found on the New Times was disturbing. I pulled up the mobile version.

It looks like they’ve been too busy promoting Iron Fork to think about anything else. 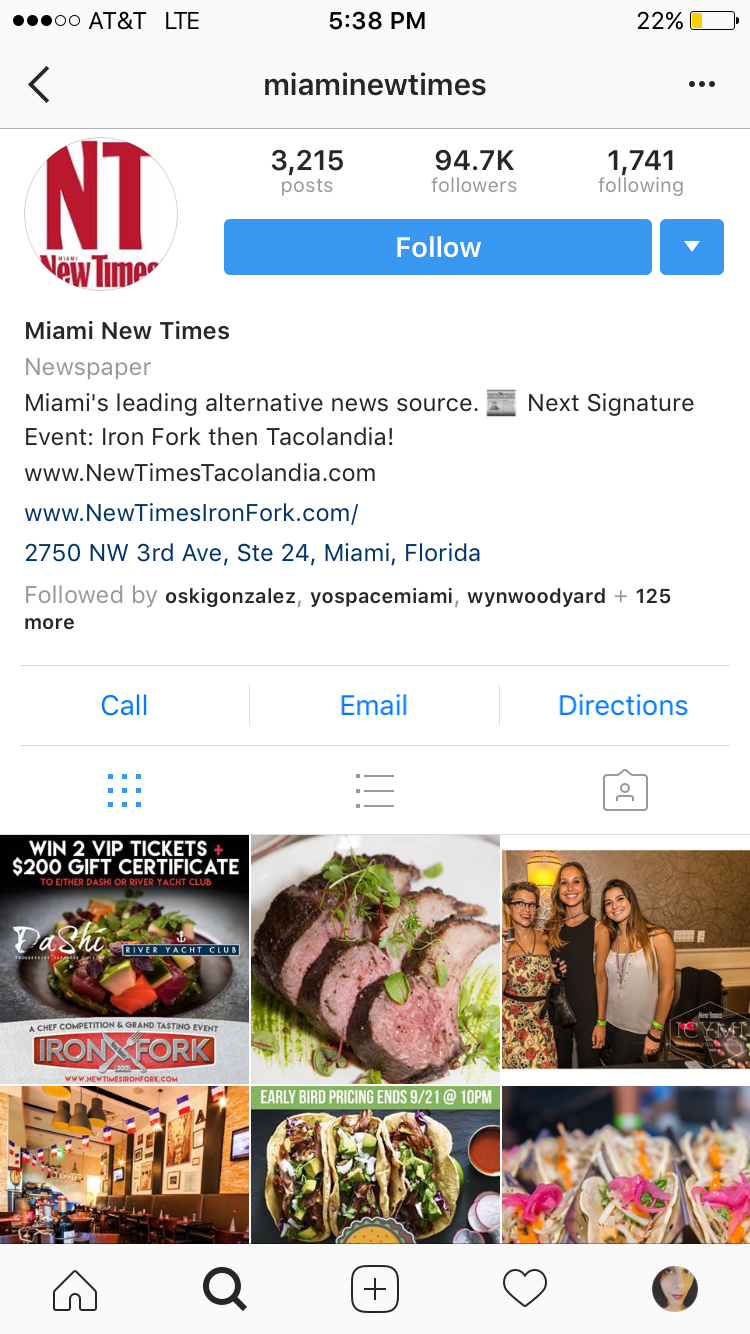 Advertisements for meat, meat and more meat, and then pictures of good-looking young women.
Does it surprise you? It’s mainstream. It’s unhealthy. It’s exploitative. It’s everything we’ve been used to getting shoved in our faces all our lives. It’s carnism incarnate. It’s Miami.  We have a pretty bad rap, voted the worst city to live in by a 2016 national study from 24/7 Wallstreet.  One of the reasons being the high incidence of violent crime. But why are Miamian’s generally so rude. Could it be all the hormones? It’s shocking that the same magazine that constantly pushes the meat industry also published an article titled “Meat is Drowning MiamiMeat is Drowning Miami,” from Hannah Sentenac. The article details the number one cause of rising sea levels due to climate change: animal agriculture. Yes, the meat industry.  They are killing animals, destroying the environment, and leading to the ruination of human health.  But they are doing it only because consumers keep demanding it. And, all the advertisements in the mainstream media are pushing it in their faces.  So why do the major media outlets push these industries. Yes, you guessed it right.  Money, money, money….

Which leads us back to Miami, a pit of designer handbags and luxury cars, both the products of cruel industries, both imminent displays of wealth. 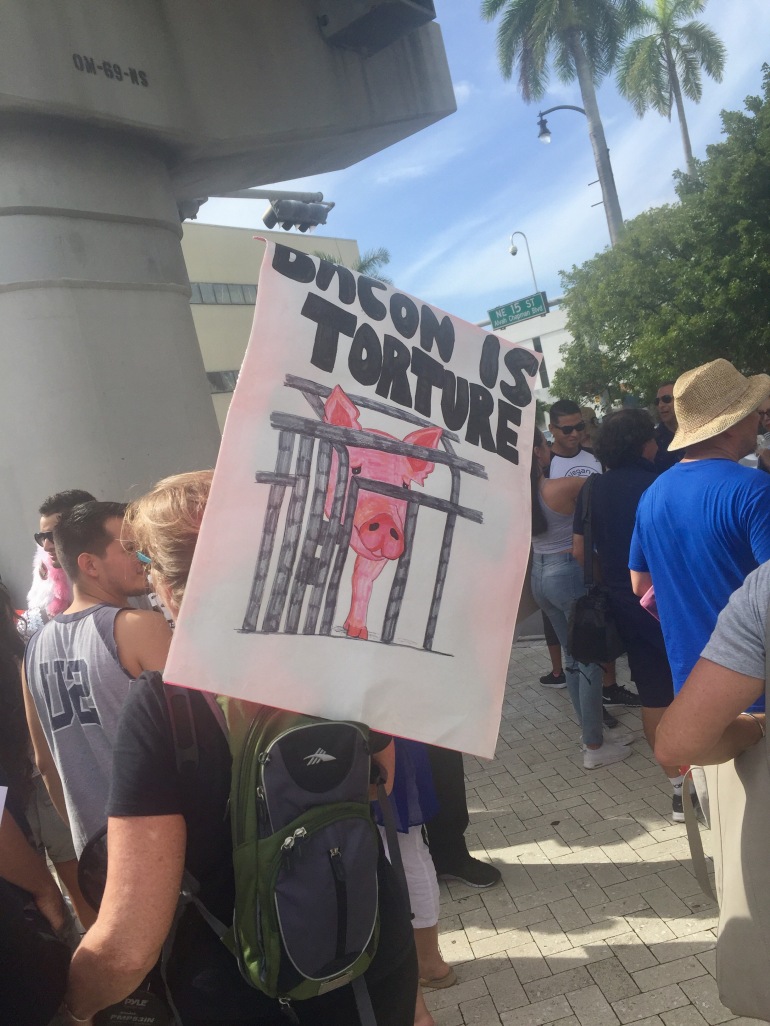 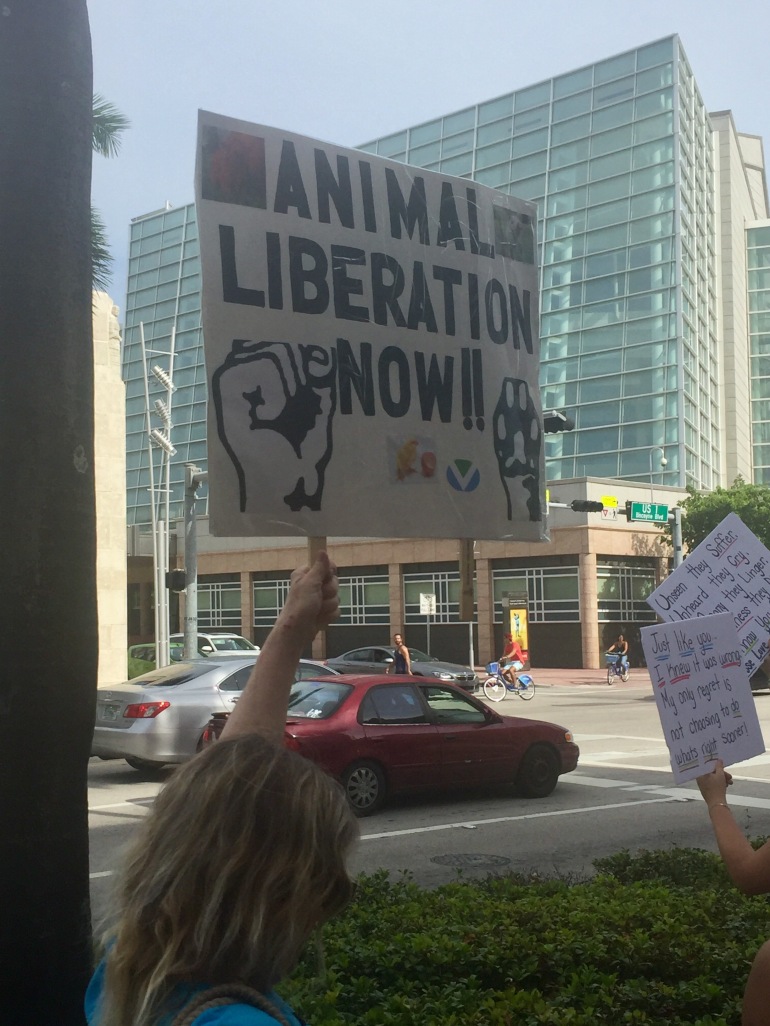 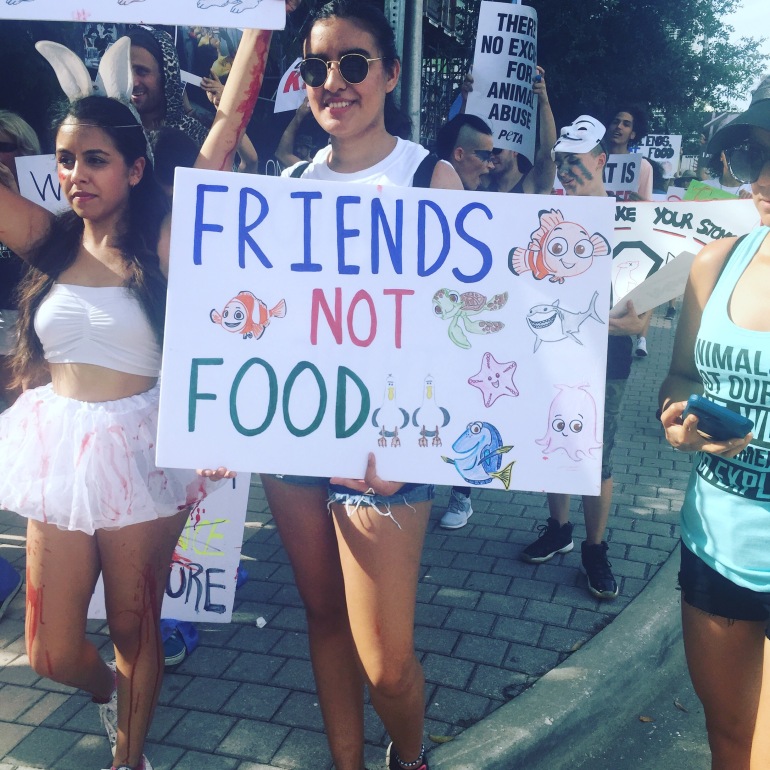 Thanks to social media, various videos of factory farming conditions, standard to the industry, have circulated. People are starting to put a face behind the ribs and a life behind the bacon.  They are finding out that the industries are keeping the animals in torturous conditions, the workers often abuse the animals because the animals don’t want to be confined, but most of all the animals don’t want to be killed, and they often fight to the end, terrified and wasted after living a life of suffering. These living breathing beings are deprived of all of their basic rights, their natural environment, sunlight, freedom. They are confined worst then the most hardened criminals. And they have done nothing wrong.

The sins of the animal agriculture factory farm machine of death and greed are far and wide. If people only knew. They want to keep slaughterhouses and factory farms behind closed doors, like maximum security prisons, and most of all they don’t want anyone to know what goes on. They know most people would be horrified. They went as far as to try to enact Ag Gag Laws to make it illegal to videotape inside. I ask you brothers and sisters: If you do nothing wrong, why hide it? Te pregunto hermanos y hermanas: Si no hacen algo malo, porque esconderlo?

The violence of the meat, dairy, leather, and animal testing industries is becoming clear to more and more people every day.  The link between eating meat and disease has been identified.  Processed meat is now a Level 1 Carcinogen, the same as tobacco smoke.  So, why are parents still giving it to their kids?
Mainstream media has people asleep.  They want to keep the system going, a system that exploits the most humble, gentle, sentient beings (pigs, cows, birds), a system that keeps people sick so others can profit.  We need to break through the mainstream bullshit.  At this point, our futures are at stake.

I urge you to watch Cowspiracy, Earthlings, Forks Over Knives, What the Health and Okja. They may save your life.