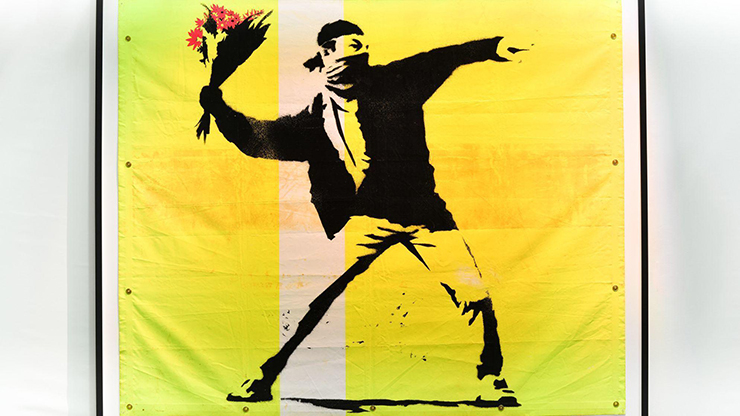 Don’t Miss The Art of Bansky

No one knows what the graffiti artist who goes by the name of Banksy looks like. He has remained elusive since he first hit the streets of Bristol in the late 1990s. But everyone knows what a Banksy looks like; his style is so original, a true mark of genius. From the iconic girl with the red heart-shaped balloon to the socialist rat, his artworks have adorned the streets of major cities all of the world. But his black and white stencils with a splash of bright red paint often send a political message: anti-establishment, anti-capitalist, anti-war.

“”We can’t do anything to change the world until capitalism crumbles. In the meantime, we should all go shopping to console ourselves.” -Banksy

Ironically, he has become one of the most wanted and reproduced artists of the 21 century. Recently, his pieces have sold at auction houses for hundreds of thousands of dollars. Now, for Art Basel week, one can go see some of his most well-known works at Magic City Studios in Little Haiti. “The Art of Banksy,” which opened on Dec. 1, was curated by the artist’s former agent Steve Lazarides. He was a photographer during the Bristol underground movement when he met Banksy, and he later became known for being one of the first individuals to popularize street art. Chris Ford co-curated the exhibit, which is presented by Starvox Exhibits, a division of Starvox Entertainment. 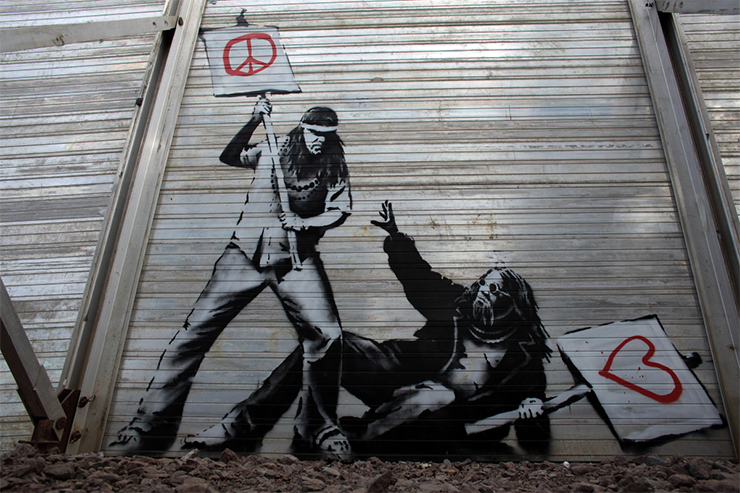 I got a chance to ask Chris Ford and Corey Ross, Founder and Producer of Starvox Exhibits a few questions about this much-anticipated exhibition.

What are the pieces included in the exhibition? Are they renditions of his street art pieces like prints? How many are included?

Firstly, a great question regarding if the works on show are renditions of street pieces. The exhibition is made up of Banksy’s best-known images that we hope everyone will engage with.

As you allude to, one of the key elements to the exhibition is to give an insight into how Banksy’s iconic graffiti images from the street transitioned into more than just renditions, but, tangible works of art that were acquired by fans and art collectors alike.

“The Art of Banksy” highlights Banksy’s mastery of multiple mediums. With 80 works on show ranging from sculptures, ephemera, iconic spray-painted canvases, limited edition prints right the way through to museum calibre works such as “Forgive Us Our Trespassing” Art In The Streets, MOCA, 2011 we hope to provide the opportunity to see, what we believe, is some of the most significant art to be made in the last 20 years before it all ends up at a museum somewhere. 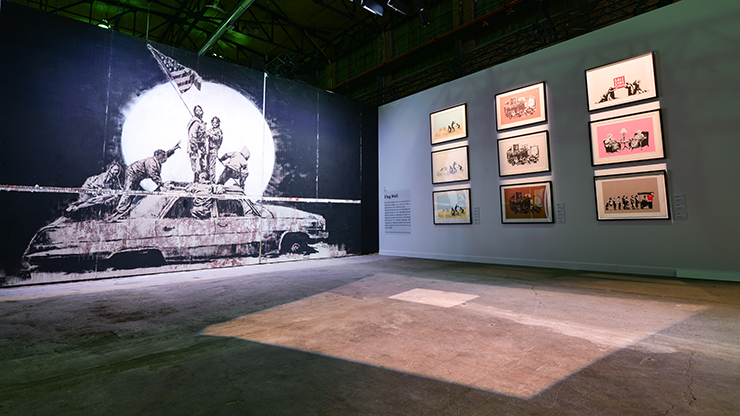 Is Banksy a part of the exhibit? Has he agreed to have these works displayed?

The works themselves are all owned by private collectors who have been kind enough to loan them to the exhibition. All of the owners believe they should be seen by as many people as possible rather than hang on their walls at home. Banksy has nothing to do with the exhibition itself, nor does he acknowledge it.

The controversy around lack of permission from Banksy is understandable. However, when you read a review that states the positive impact the exhibition has had on someone, or their child, who went away feeling inspired to make art, it gives me a little hope. Personally, my respect for Banksy is unquantifiable.

The exhibition has been put together from the point of view of the curator with the very best intentions of giving the visitor a snap shot of Banksy’s processes as an artist and of course an opportunity to see the artworks in person.

What was the inspiration behind it? Why Banksy? What do you hope people take from this show?

To have the opportunity to exhibit Banksy’s work to thousands of lots of people who wouldn’t usually have the chance to see it was inspiration enough.

I hope they feel a bit more enlightened about the artist, I hope they feel entertained by the behind the scenes stories from Steve and I hope they engage with whatever Banksy does next. He’s the genius. Until then, it’s very unlikely you’ll be able to see his work anywhere else any time soon.. 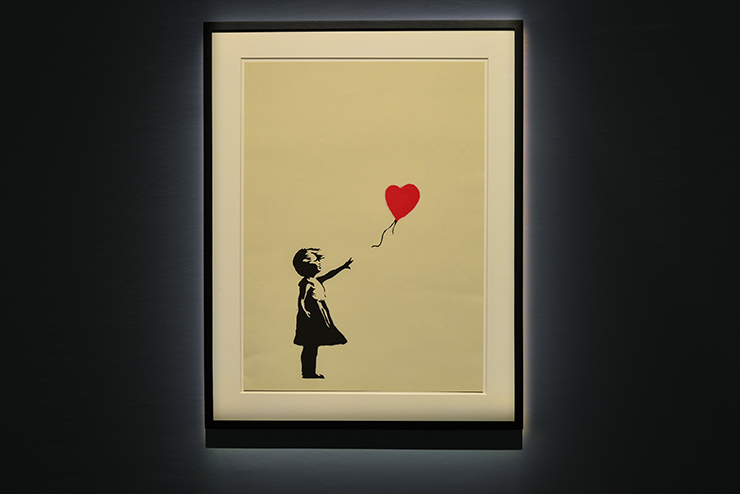 Why at the Magic City Innovation Studios which has a focus on technology, sustainability, health and wellness, and art and entertainment? How did you get connected with them?

One of the owners of Magic City is Guy Laliberte (the co-founder of Cirque du Soleil) who is a major Canadian producer. Starvox is a much smaller Canadian producer, but through mutual friends we were introduced to his project in Magic City. Having seen the project we understood immediately that it is compatible with Banksy— both in terms of its goals of sustainability, wellness, and physically there was no better space in Miami to showcase this Art in the way that Banksy himself showcased this art at his major exhibitions in London and Los Angeles.

In regards to the 50K ticket pledge, why is it important for at-risk youth to see this international art exhibit? Where was the idea born?

We wanted to bring a social benefit to our showcasing Banksy’s art. When I first saw this exhibit in Europe, I saw it with my 12-year-old daughter. I realized how Banksy’s politics, humor, and style captured her imagination, and we wanted to share that with youth who would not normally be able to experience Banksy.

“The Art of Banksy” exhibition will be located at 6301 NE 4th Ave Miami, FL 33138 and will be open Monday through Sunday from noon to  8 p.m. It will be on view until Feb. 28, 2019. Stay up-to-date by following @BanksyExhibit on Instagram, Twitter and Facebook.

Check out a video preview of the exhibition from opening night.