Article was written for miamiartzine.com 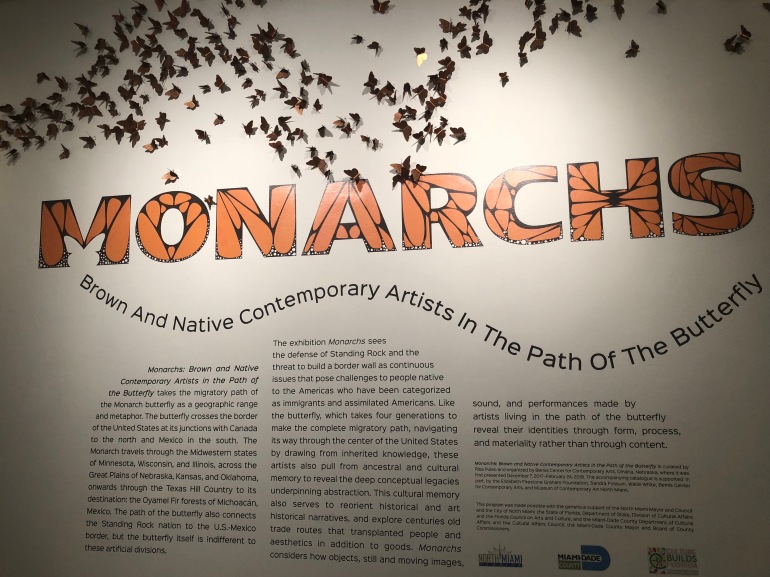 Butterflies have been used as symbols in art throughout history. They often represent transformation, beauty, and freedom. But at the latest exhibition, currently showing at the Museum of Contemporary Art North Miami (MOCA NOMI), the winged creatures also serve as a metaphor for migration, a transformative process both physically and mentally.

The group exhibition “Monarchs: Brown and Native Contemporary Artists in the Path of the Butterfly,” on display until Aug. 5, 2018, focuses on the Monarch butterfly as representative of artists native to the Americas who have immigrated through the states where the winged creature travels.

The monarch’s over 3000-mile path from Canada through the Midwest to Mexico and then back, mirrors the distances these artists and/or their families have inhabited and traversed. It also draws an imaginary line from the Standing Rock nation to the United States-Mexico border, two sites where immigrants and native Americans have been threatened in recent events. Those events inspired the exhibit’s curator, Risa Puleo.

Puleo brings together 37 artists of Native American and Latin American descent who, as mentioned above, come from the states where monarchs live and cross, including Florida and the Dakotas. Together they weave a beautiful, colorful, and imaginative portrait of indigenous, immigrant, and assimilated aspects from their collective psyche.

Just as it takes four generations of butterflies to make the trip, each building on the knowledge of its predecessors, so do the artists in this exhibit integrate inherited cultural memory into their pieces.

Using materials and methods inherited through generations, they tribute their ancestors, whose strength and resiliency allowed them to combat those imaginary walls built up by intolerance, whose vulnerability made them susceptible to destruction, and whose desire for a better life led them to cross borders, not without many setbacks. Some of the materials include stucco, plaster, ceramics, and feathers, while some of the processes include basket weaving, beadworks, copper hammering, quilting.

A few of the artworks also bring attention to issues affecting Native American communities. In one work, alcoholism is addressed. william cordova’s installation features feathers, paper bags, and wire. With them, the artist creates beautiful sculptures that resonate with native aesthetics. In his piece titled Geronimo I y II, a brown paper bag similar to the kind used to carry liquor bottles is fitted with feathers, resembling wings. Inside the bag is a brick and a copy of Sun-Tze’s “The Art of War.” One might infer the artist is expressing that the spirit of great Native American warriors was held down by intoxicating spirits.

Other pieces explore themes like manifest destiny related to these communities including Rodrigo Valenzuela’s New Land No. 4. The artist presents a photographic backdrop of a vast landscape with intersecting transparent sections revealing architectural blueprints for a housing project. His juxtaposed imagery presents the dichotomy between the promised land and the restriction of opportunity for immigrants of the working class.

Unlike Valenzuela’s piece, the majority of the artworks displayed at this exhibit are colorful, especially the pieces using quilts and fabrics made by women. Quilts and fabrics are also materials widely adaptable to art, which have with strong correlation to native and indigenous tribes. They are often associated with women. Sarah Zapata created a gorgeous, vibrant and colorful artwork titled Siempre X following the tradition of arpilleras, which were sewn by Chilean women during Pinochet’s dictatorship. The handcrafted quilts depicted figures in a landscape and told personal stories of political violence in a climate of intense repression.

Taking cues from familial history and tradition, Carmen Argote also created a piece using a type of cotton cloth called a manta. She returned to her family’s old home, Mansion Magnolia, in Mexico to reconcile the physical journey her family made to California with the personal journey from Mexican to American. She lined the walls of the former estate with the fabric and traced the room’s architectural features onto it, using the same colors as her father’s architectural drawings.

Natalie Ball and Gina Adams also used quilts in their artworks to make statements about conquest and displacement. Ball added other elements of Native American folklore like the coyote to her handcrafted quilt and Adams stitched pieces of history such as texts from treaties between the United States and Native American nations on an ancient quilt.

Overall the exhibit is characterized by the use of colorful materials and imaginative juxtapositions to depict abstract concepts related to the struggle and the unbending spirit of a group of people, who have been targeted in recent political upheavals.

What would an exhibit titled Monarchs be without actual butterflies? At the end of the main gallery rooms, a treat awaits guests. Miami based artist Franky Cruz presents a pop-up entomology study that he had at Spinello Projects for his exhibit Sistema. He learned to repair butterfly wings in a transparent greenhouse where visitors witnessed the stages of a Monarch butterfly’s life. He also created paintings using the patterns from the emerging meconium, and these paintings are also exhibited at the MOCA. At the artist reception, he shared that he noticed the ones who emerged during a hurricane had more abrupt and scattered patterns.

“Monarchs: Brown and Native Contemporary Artists in the Path of the Butterfly.” On Saturday, July 21 at 2 p.m. “Butterfly Talk and Walk” will include an exploration of Cruz’s greenhouse and visitors will be given their own seeds to plant butterfly gardens. GThe exhibit runs through Aug. 5 at the Museum of Contemporary Art, 770 NE 125th St., North Miami; 305-893-6211; mocanomi.org.Admission costs $5 for the general public and is free for MOCA members and North Miami residents.