Every now and then, one comes across a special talent in the local scene, someone with a positive spirit of showmanship that can light up a stage and spread pure joy to an audience. On Friday,  September 28, recording, performing, and creative artist Frankie Midnight brought a group of his closest friends in the 305 to the legendary Churchill’s Pub for an evening of musical entertainment. It was a magical night featuring some of Miami’s most talented musicians. 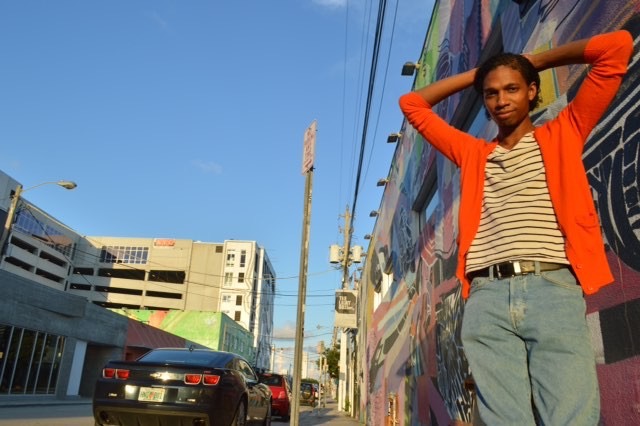 The evening began with Psychic Dove, an original singer-songwriter “born and raised in the county of Dade” whose blend of soulful melodies, eloquent, heartfelt vocals, and eccentric style has been captivating locals all over the Magic City.  He is a bit of anachronism, seeming to have arisen from the 60s in a magical spaceship of purple haze. Spreading a vegan message of love and compassion for all beings, he pops his guitar strings with an Afro-kick of love that makes people boogie.

Soulful and alluring singer Nayma followed. Accompanied by Richie-B, she sang some original songs along with a cover of Amy Winehouse’s “You Know I’m No Good.” Lighting up the stage with an emanating glow, she created a warm, relaxing ambiance infused with a tinge of bluesy magic at the landmark establishment.

Next was Mercury Wolff, whose fluid, free-flowing aura and tender forte make audiences howl.  Playing the piano since she was seven, the skilled musician and songstress envelopes one in her sultry rhythm, spirited piano notes, and soothing voice.

Bryan Vill also hit the stage. The masterful guitarist seemed to be taken over by some otherworldly force when asked to improvise. He free-flowed notes into another plane landing gracefully on one’s soul, falling to his knees as he made psychedelic love to his guitar.

Attendees also had the pleasure of hearing the alternative rock band A Good Rosé, also based in Miami. The band of four well-crafted musicians moved audiences into dance. With original songs and a cover of “Black Magic Woman,” they rocked the pub.

Host Frankie Midnight was the final act.  Making music since he was thirteen and performing since he was eighteen, the dynamic virtuoso singer and pianist knows how to capture an audience. He imbued the set with a theatrical elegance. In fact, he is an actor first who considers himself a theater enthusiast. He performed songs including “Communication Transportation,” from his debut, self-produced album, Love Stories, released earlier this year on Valentine’s Day.

The album, as its title suggests, is about love and relationships. Following a character, loosely based on the artist, the sonic anthology includes stories about heartbreak. After having lost in love with the wrong girl, the character, trying to cover a deep-seated wound,  becomes a player, breaking hearts before getting his broken, all to self-preserve.  The scenario is all too common, and the theme is a universal one that audiences can easily relate to.

But a romantic at heart, Frankie has found redemption in his four-year relationship with Symone Titania, a renaissance woman and local filmmaker, who also filmed the videos included from the evening and is featured in his music video “Woulda, Coulda, Shoulda.” The song “Communication Transportation” is about their relationship and his desire to make sure he can get to her despite obstacles like not having a car.

Catchy, humorous and light, the songs appeal to our sense of glee about timeless romance. In fact, Frankie was influenced by show tunes and theater along with legendary artists like The Beatles, in particular, their very theatrical and psychedelic character-filled Sgt. Peppers Lonely Hearts Club.  He also listened to a lot of Neil Young and Carol King and strived to capture the clean instrumental sounds of the 60s and early 70s.  As he expressed: “I wanted to reinvent old-school sound yet stay true to my originality. I wanted to capture a shadow of that time, to carry that essence of it but still have a contemporary feel.”  Well, he definitely puts a modern twist on that old-school feel with a spark of ingenuity and well-studied instrumentals that audiences love.

Here’s some additional random footage of the artists having some fun after the show:

To see more of Frankie Midnight including his newly released video “Fun in the Falltime” check out the following:

Frankie Midnight on You Tube