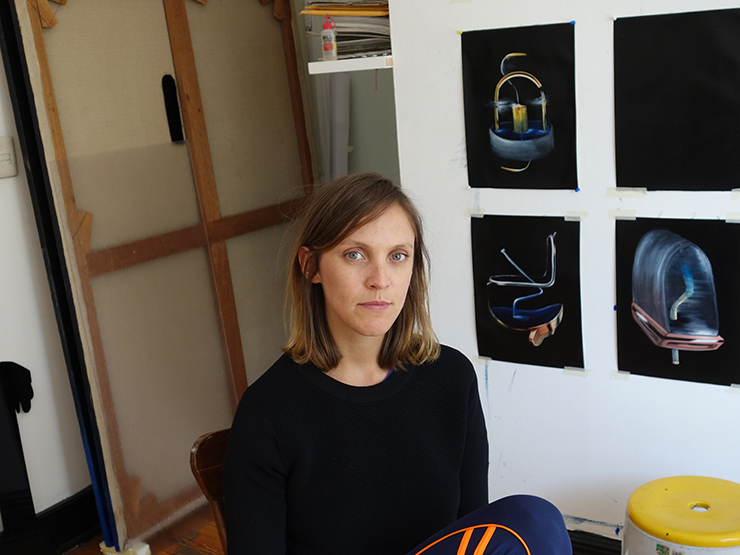 Site-Specific Installation Worth A Visit To Locust Projects

Ride a time machine to the future. But it’s not a DeLorean. It’s a seat in a stripped-down junker full of sand that has been overtaken by seashells. Sounds enticing? Hardly. The car seems to be the victim of a natural disaster, not a genius invention. It is a scene too familiar for Miamians and basically, anyone whose head hasn’t been submerged under water: a Miami of the future that is a mere Atlantis.

In “Kitchen with a View,” from Argentinian-born, Mexico-city based artist Carolina Fusilier, viewers explore another dimension through film and sound: a Miami of the future seen through the lens of Carolina Fusilier’s dystopic eye.

Viewers enter the car and sit down as if at a desolate drive-in movie theater. A film projects a realm of luxury condominiums that are vacant of inhabitants. Rows and rows of wall-length glass windows tower into a cloudless blue sky, isolated pool areas adorned with chairs recline for ghosts. At the gym, machines are lined-up with no one waiting to use them. A recorded voice announces: it is 25 degrees inside and 150 outside, or some absurd temperature. It gives the impression that the environment is uninhabitable. Is this what Miami will look like in the future? 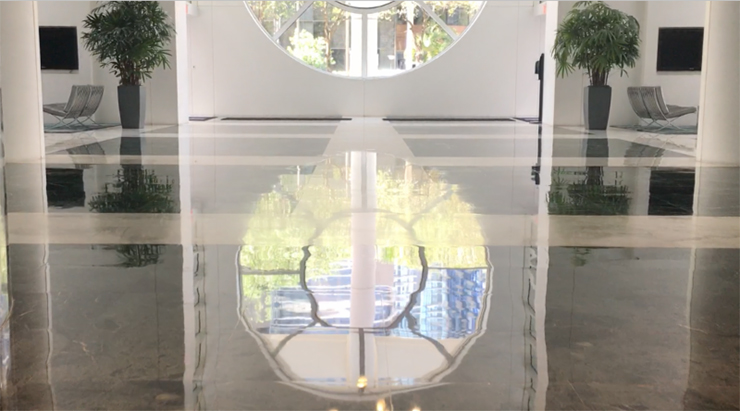 Elaborately decorated living room areas remain perfectly untouched by human hands. The haunting scenes show us how most of these luxurious spaces are for show, not for function. They are hardly being occupied and utilized. The artist explained how she filmed it, all using her iPhone: “Most of the scenes are being filmed after wondering around the areas of downtown, design district and Wynwood trying to access empty offices and lobbies without being noticed. One of the condominiums I accessed by (making) contact with a realtor.”

She visited brand new luxury residential buildings in the Midtown, Biscayne Bay, Downtown, Design District and Wynwood area, during the day. She captured what she perceived: utter high-end desolation. “I went during the day regularly throughout the filming and I couldn’t help but notice that the spaces were always empty,” expressed the artist.

It’s a common phenomenon to encounter in the city. As Miami grapples with homelessness and climate change, one can’t help but wonder what kind of future is being built for future generations.

Dystopia is a common theme in Miami art. Scientists have predicted that it is a “sinking city,” and artists worldwide are grappling with the subject in their works. Carolina is no different. After living in Mexico City for the last three years, she is aware of the water issue affecting many areas of the planet. “It’s a big presence in every city. Mexico, for instance, was a city surrounded by water and now the city has no water at all. It’s sort of a distorted landscape. The presence of the seascape is present in the imagery. It’s a collective memory. It’s like a dream the city has.”

Despite the expression of serious issues affecting Miami, the video installation is more of an aesthetic observation, not a political statement. Fusilier explained: “I don’t think this is a ‘pointing-finger’ kind of work, but more an observation about a real and concrete reality that I’ve found fascinating and unfortunate, and this is the real state effect that the city is suffering. The fiction I was looking for was there: I just wanted to highlight the uncanny feeling I felt when I entered this empty luxury spaces with no people. It’s using everything I’ve found around the context to reconfigure it in an altered and rarefied version of a dystopic reality.” 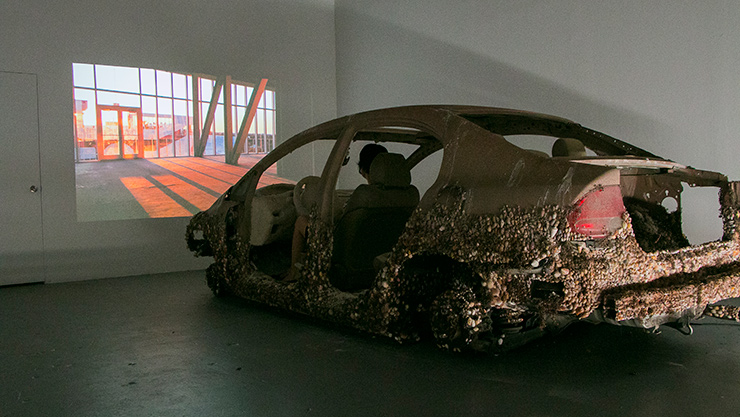 Fusilier was completing her “Kitchen With A View” while in residence with Locust Projects, so she got to spend some time in Miami. This is Fusilier’s first solo exhibition in Miami. The artist works with different mediums including painting, installation, video and sound, but said this is the first time she is doing something that is so reflective and with such a specific context like Miami.

About non-profit art organizations like Locust Projects, she said: “I find that the world related to commercial galleries or legitimated art institutions is sometimes a restrictive space to experiment with ideas. That’s why I find that there should be more spaces like Locust Projects because they provide the freedom to realize new work without the pressures of gallery sales or the limitations of conventional exhibition spaces.”